2020 was a year unlike any other we have experienced in out lifetimes. When 2020 began, the United States was in the middle of impeachment proceedings against then president, Donald Trump. Impeachments are historic events but this one quickly faded into the dustbin of history. In a very short time, Americans were brutally thrust into the perfect storm of the worst pandemic in 100 years, the most severe economic downturn since the Great Depression of the 1930’s, violent civil unrest across the country and the wildest presidential election in our memory.

Who could have predicted on Jan. 1, 2020, that a coronavirus invisible to the human eye would change life for nearly every person on the planet and kill more than a million people? COVID-19, was first discovered in December 2019, after a cluster of people in Wuhan, China reported respiratory illnesses. By March, the virus had become so far-reaching that the World Health Organization declared it a global pandemic.

The response from many of us was to panic, emptying grocery store shelves of items such as toilet paper which had little to do with the pandemic. We retreated behind masks and learned about “social distancing’ and the proper way to wash our hands. Mixed signals from leaders and “experts” caused much confusion and finger pointing. Shutdown or no shutdown? Mask or no mask? Is the vaccine good or bad? Are Democratic governors and mayors trying to destroy us financially and steal our religious freedoms? Is Dr. Fauci a fine man or a devious political plant? Can we trust the CDC?

In the United States, by the end of 2020, there were more than 20 million confirmed cases and more than 350,000 deaths according to the official numbers. Over 22 million jobs disappeared at the start of the pandemic with many businesses forced to close. Mandated school closings caused students to fall dangerously behind. Churches across the country were forced to shutter their doors because of governors strict stay at home orders, causing pastors to scramble to find new ways to reach their congregants. Eight months after government lock downs began targeting churches, a nationwide survey showed that only about one in ten Protestant pastors in the U.S. reported that their church attendance was close to pre-pandemic levels.

We have all suffered loss in this tragedy of Covid and it was a year that most people would be glad to forget. But God turned it into one of His most incredible years ever. Church doors may have been shut but God used other means to reach the hurting- satellite television, online video, streaming and social media platforms- to spread His peace and love as a viral antidote to despair and fear.

The website BibleGateway.com was searched 10 times more in 2020 than in 2019. YouVersion recorded nearly 600 million searches worldwide. Isaiah 41:10 was ranked as the most searched, read, and book marked verse on the app. The verse reads, “So do not fear, for I am with you; do not be dismayed, for I am your God. I will strengthen you and help you; I will uphold you with my righteous right hand.”

In the midst of the suffering a number of revivals broke out across our country, such as the one in Tennessee involving over 1,000 churches. Pastor John Butler said, “All of the services have been Spirit-filled yet some are just overpowering and that is what we are seeing.”

In April, more than 100,000 people watching virtual and broadcast events in countries around the world responded to the Gospel and professed faith in Jesus Christ according to Pulse, the Christian ministry that organized the programming. Nick Hall, the founder of Pulse said. “The doors to our church buildings may have been closed, but the church has not closed.

Hearts were filled with the Holy Spirit as tens of thousands of people across the country joined praise leader Sean Feucht and his team in state after state on his nationwide “Let Us Worship” tour. People of all ages and from different walks of life have gathered at these worship events to receive salvation, be baptized, witness miracles and entrust their lives to the Lord. Feucht said that the movement reminds him of the Jesus People Movement of the 60’s and 70’s. “People are encountering God like never before,” he explained. “I know it’s in the middle of a global pandemic, but in the midst of it all God is moving.”

In Georgia, alcoholics and drug addicts were among those accepting Christ in what was being called the “Central Georgia Awakening.” Pastor D.R. Harrison shared, “Families were being restored and salvations and miracles are taking place. In the middle of chaos God is still alive and on His throne.”

By the end of 2020, two vaccines were being distributed that hopefully will be the beginning of the end of this horrible virus that has caused so much heartache to our communities. We should all be praying that it does. But we all should also realize that God is on the move across our land and our hope today is still in our Lord Jesus Christ. And even in a year like no other, He will always be the answer to our problems.

The coronavirus pandemic dominated 2020’s news cycle heading into Memorial Day weekend. But that changed on May 25 when 46-year-old George Floyd died after a Minneapolis police officer pinned him to the ground during an arrest. Floyd’s death sparked months of nationwide protests focusing on racial discrimination and police brutality. The Black Lives Matter organization became the voice and energy behind the protests and demanded that police departments across the country be defunded. On June 6, the protest movement peaked with more than 500,000 attending demonstrations in about 550 locations across America.

Despite many unsavory foundational tenets under-girding BLM ( many in leadership identify as Marxists, they oppose the God-ordained the nuclear family, are radically pro-abortion, and have a very scarey satanic connection), politicians, big corporations, the main-stream media, professional sports leagues, and sadly many liberal churches jumped on board the movement.

But what started out as peaceful protests were quickly hijacked by thugs and anarchists and turned the movement into an excuse for riots and violence. Nationwide, more than 700 law enforcement officers were injured in these “peaceful protests” and the massive damage exceeded $2 billion as many businesses and homes were destroyed. The Information Institute labeled the riots a “multi-city catastrophe event” and “the costliest civil disorder in history.”
.
Many began having second thoughts of supporting such a violent movement and soon support for BLM plunged from around 70% to near 30%. Some abandoned the cause when protestors began tearing down statues that represented U.S. history. The last straw for many Christians came when the Son of God came under attack. In a series of tweets, BLM supporter, Shaun King unleashed a barrage of comments claiming statues of Jesus were a form of white supremacy and should be torn down. After that, statues depicting Jesus were beheaded, church buildings were burned, and places of worship were painted with Satanic symbols. One pastor whose church was damaged responded in a manner that we all should strive to do when confronted with attacks, “We remain unafraid and resolute in our faith, and we pray for a conversion of hearts of those who have terrorized us. We do not answer hate with hate. To the contrary, these attacks make our love and unity grow stronger, and our prayers ever more steadfast.”

In June, after rioters had destroyed much of the city, Christian groups began holding services at the site were George Floyd died in Minneapolis. They saw many people turn to God and saw the Holy Spirit heal bodies and hearts as salvations, baptisms and worship filled the streets. Soon afterwards, one of the pastors there took the movement to the streets of Kenosha, Wisconsin which had also been devastated by riots. He posted on Facebook, “A massive move of God, salvations, healings, racial reconciliation, and awesome baptisms on the streets. Riot to Revival. Glory to God!!! Let the healing begin!” These are just two of many examples of Christians fighting a spiritual battle in cities overrun with rioting.

As if the pandemic and riots were not stressful enough, incumbent President Donald Trump and former Democratic Vice President Joe Biden went head to head in the most divisive presidential election in our lifetime. Many experts called it the most pivotal election since Abraham Lincoln ran against General George McClennon in 1864- a time when the Civil War was raging and nation was equally divided.

For most Democrats, it would literally feel like the end of the world if Trump won again. Four more years of Donald Trump in the White House was a scenario that was absolutely unimaginable, and they fought like mad to keep that from happening. But of course Trump supporters were equally determined to keep him in power, fearing Biden’s far left stance on abortion, open borders, and climate change. They were also concerned about assaults on religious liberty, the threats to the Bill of Rights and the Second Amendment, and the defunding of our law enforcement and military. In the end, close to half the country was going to be bitterly, bitterly disappointed, and they would be in no mood to be governed by whoever won. There was no way that this was going to end well.

In most of the past presidential elections, the outcome had been projected on election night or in the early-morning hours of the day after the election. However the winner of this hotly contested race would not be determined for weeks as a record number of Americans voters (46%) voted by mail-in ballots and a number of those were accepted for days after the election in some key swing states. Lawsuits brought by Trump and his campaign claiming voter fraud would keep the outcome in doubt through the end of 2020. After going to court in six states and losing more than 50 cases, including at the Supreme Court, Trump was forced to finally concede on January 7th but he and most of the record 74 million people that voted for him still believed he had beaten Biden.

One half of America knows exactly what happened. The election was stolen. Massive fraud was perpetrated. Trump’s warnings were absolutely right. The other half of America also knows exactly what happened. Joe Bidden won the election fair and square. That is why the courts have thrown out case after case from Trump’s legal team. There is not space here to explore all the arguments each side has made on why they are right. Books will be written about this election and it’s contested results.

This election brought to a boil the simmering tensions between those on the left and those on the right that have been rising for years, especially the years since Trump was first elected. A winner being declared did nothing to ease the tensions between the two sides. Sadly, a recent survey found that 40 percent of Americans say the political opposition is “down-right evil” and many believe that violence would be justified against those who are seen as evil.

This is why we desperately need God now more than ever. This is why we must cry out, fall on our faces and fervently pray for divine intervention because while 2020 was a year like no other, our country cannot afford another year like that.

I do not know what is God’s plan for America in the coming year but one thing that gives me confidence is that I know that all things work together for the good of those who love God. And when God wants to heal a land, He doesn’t seek the cooperation of the government but the Church. 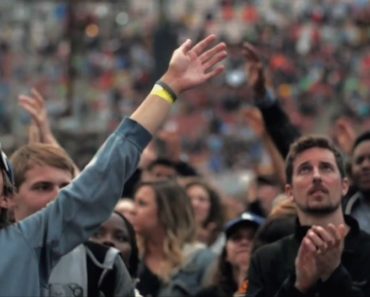