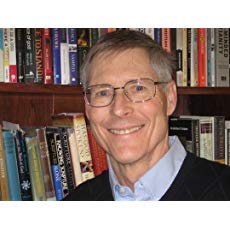 Paul Ernst has always been a deep thinker. Whether it was science or philosophy, he was the one constantly asking “Why” and “How?”. Paul excelled in science, and his thirst for knowledge grew. Throughout high school and college, he studied humanism and materialism. He majored in chemistry, but philosophy was his main area of interest.

“So even though I might think about where the universe came from, ‘Where there’s a God,’ ‘Is there life after death?’ I pushed those into unknowables.”

At that time in his life, Paul saw science and faith as two distinct worlds. “The picture I had of Christians is that since they weren’t in science, they were in another realm that was unknowable, and some of it actually looked kind of silly to me that I just wasn’t interested in that.”

Throughout his forties, Paul’s world view remained secular, totally anti-religious. Then something happened: The big 5-0. Fifty years old. Paul’s mortality, which was once irrelevant, now had new meaning. “I have a fear of dying. I don’t want to go into oblivion or even, or worse yet, into some kind of judgment.”

A friend of Paul, Tom Anderson, wrote a paper called An Attorney Gives a Defense of the Deity of Christ. Paul read it, and he took it to heart.

“I knew if this is true, this changes everything. This is huge. So I could immediately tell that this was something big that needed to be pursued. But the bigger part of the picture is this individual had a roadmap for connecting the dots to where I, at first time, saw the possibility of knowing whether it was true or not. And I thought ‘I’m not going to live forever; maybe I’d better look into these things and settle them.’”

Then another friend gave Paul a book called The Case for Christ. “The book interviews Christian scholars on various topics like the resurrection, the reliability of the text, and as though this investigative reporter, Lee Strobel, is interviewing these different experts. And so I begin to mimic the process of what I see going on in The Case For Christ. And it sort of put me into some turmoil. ‘Is it true? Maybe it is. Maybe it isn’t.’ And that went on for about a year.”

Paul weighed the evidence, poring himself into philosophy, science, and religion. However, one book remained… unread.

“Up to this point I’d been reading books about the Bible and other types of evidence for it, but I hadn’t actually read the Bible. I was sort of afraid to read it, that it would take me away from what I was now hoping to be true. But through my studies I learned about this passage called Isaiah 53, and I read it. And it was a picture of the cross. And I said, ‘There’s got to be a transcendent being above who has control of this book and knows the beginning and the end,’ because there’s information in here that only a being outside of time could know about.

“I began to see that the Christian scholars really did have the upper hand in this game. They had the goods. And it became increasingly apparent that the atheist side was a very weak argument. It was really based on the presupposition that the natural world was all there is. The tide really turned in favor of Christian truth. And at that point I really formed the idea ‘I’m compelled to believe this.’”

Alone in his study, while reading Isaiah 53, Paul asked Jesus Christ into his heart. “It was a feeling, I would say, of trust and of hope, because I was aware of a level of hopelessness in my life. So I would say that the part of Christianity that struck me first and largest, was hope.”

Paul has been a Christian, a follower of Christ, since 2001. That was the same year he married Mary.

“When he talks about Isaiah 53 to others, he tears up because it’s so powerful,” says Mary. “The deep love of Our Lord Jesus is beyond words for me. There’s only victory in Christ. And both of us, if we’re speaking about our faith, we speak about Jesus.”

“So if Jesus rose from the dead, why did He rise from the dead?” asks Paul. “And the best explanation out of all the possible ones, both natural and from other religions, was that the God of the Bible raised Jesus from the dead.”

“Jesus rescued me. He paid my ransom. He paid the price. So there’s, in a way, there’s a debt I could never repay except to live for Him.”