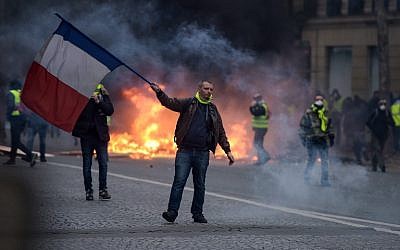 Well, the city isn’t burning, but there is plenty of fire in the streets. Especially the Champs Elysées.

Massive protests have shut down major parts of the country over the past several weekends. In fact, on a recent Saturday, the French government deployed almost 100,000 police officers to contain the demonstrations.

The protesters are called “yellow vests.” They are wearing the yellow safety vests that French law requires all motorists to carry in their cars to be worn in case of a roadside emergency.

The protesters are furious. And they are supported by 77% of the French people.

Their growing anger and dissatisfaction with Emmanuel Macron, France’s “globalist” president, exploded when his government tried to impose a new tax on automobile fuel. Gasoline in France already costs more then $7 a gallon. (Which, by the way, is exactly what President Obama once said that Americans should be paying for gasoline. Remember that?)

But the tax wasn’t intended to raise more revenue for the government. Instead, it was a punishment tax for those who dare to use automobiles in the first place, and thus contribute to climate change.

When the protests erupted, French officials tried calming the public by educating them on the dangers of global warming! But their politically correct explanations only made things worse.

The French leaders don’t know, or maybe couldn’t care less, that the people who need the automobile fuel are the people who make a nation work. Nations run on energy. The more heavily politicians tax energy, the more they slow and inhibit the nation’s economy.

I think the French are fed up. Especially with Macron and his globalist ambitions. His approval rating currently stands at 23%, which makes him the least popular French president in modern history.

Macron recently had the audacity to condemn U.S. President Donald Trump for his America First philosophy. He criticized the “selfishness of nations only looking after their own interests.” He said that “nationalism… (is a) betrayal of patriotism.”

Well, I think the people of France are ready for national leaders who will put their interests first for a change. Not those of the European Union. Not those of the Muslim migrants who have invaded France. Not the interests of the global elite — of which Emmanuel Macron fancies himself a leader.

Two cases in point. French President Macron is an ardent supporter of the new U.N. Migrant Agreement which is a step toward a borderless world. A group of French generals recently accused Macron of treason for supporting this pact.

Also, he and German Chancellor Angela Merkel are openly promoting a “true European army” to be the enforcement arm of the European Union.

He publicly declares that it is needed to “protect the Europeans… with respect to China, Russia, and even the United States of America.” So now, in the mind of the globalist Macron, America has gone from protector to threat!

But, more likely, he and Merkel feel a European Army is needed to keep the member nations of the EU in line. Especially the United Kingdom, which has voted to exit the EU, and Italy, which is wanting to. There are also other nations who are threatening to leave.

But no matter the reason, the call for a “true European army” fits precisely with Bible prophecy. The Bible prophets describe Europe in the last days as a major military force.

Out of the old Roman Empire, which covers most of Europe today, the Bible says ten kings will arise. That can mean ten nations or a combination of nations and confederacies.

These ten will then cede their sovereignty to the Antichrist and False Prophet.

I don’t know how all of it will happen. But every upheaval, be it political, economic, or social, reshuffles the deck. From what’s going on now in France, the UK, Italy, Poland, and other Eastern European nations, a Europe-wide realignment of nations has become a logical step.

Now, Europe’s unelected, but all-powerful, leaders are planning a unified military capable of deterring or defeating Russia, China, and the United States. Just as the Bible predicts.

All of this sets up the fulfillment of yet another major prophetic sign that was once ridiculed as impossible.

As Paul Harvey used to say: “Stay tuned… for more!” 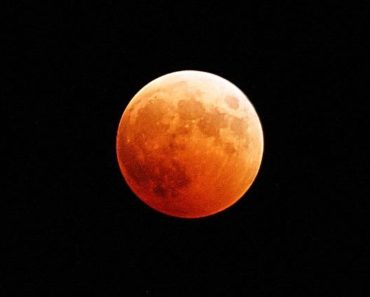