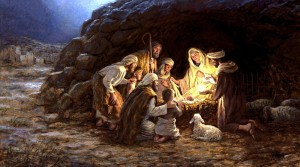 Now there were in the same country shepherds living out in the fields, keeping watch over their flock by night. . . . Then the angel said to them, “Do not be afraid, for behold, I bring you good tidings of great joy which will be to all people.”

If you are a parent, then you can remember the first people you called after you became one. You gave them the weight and length of the baby and the actual time when he or she was born. You shared the news with those who were closest to you.

When God announced the birth of His Son, whom did He tell first? It seems likely that He would have started with Caesar Augustus. He could have sent the angel Gabriel to appear in Caesar’s court and announce, “Check this out, buddy. You are not God! The Savior of the world has arrived!”

Or He might have had Gabriel appear to the religious leaders and say, “Wake up! The Messiah has been born! The One you talk about, the One you pray for—He is here!”

But that didn’t happen. Instead, God first announced the birth of Jesus to shepherds. We tend to romanticize the shepherds along with everyone else in the Christmas story, but we don’t understand who they were. In this culture, shepherds lived at the bottom of the social ladder. Shepherds were so despised that their testimonies were not even allowed in a court of law. Shepherds did the work that no one else wanted to do. They worked hard, but they were perceived as unclean because they could not observe the ceremonial hand washings. They were the outcasts, the nobodies.

The only people less-regarded than shepherds were those who were suffering from leprosy. Yet God decided to announce His news to some shepherds in the fields as they kept watch over their flocks at night. This was the modus operandi of Jesus, from birth to death. He always appealed to the outcast, to the common, to the ordinary. And that should give hope to ordinary people like us.