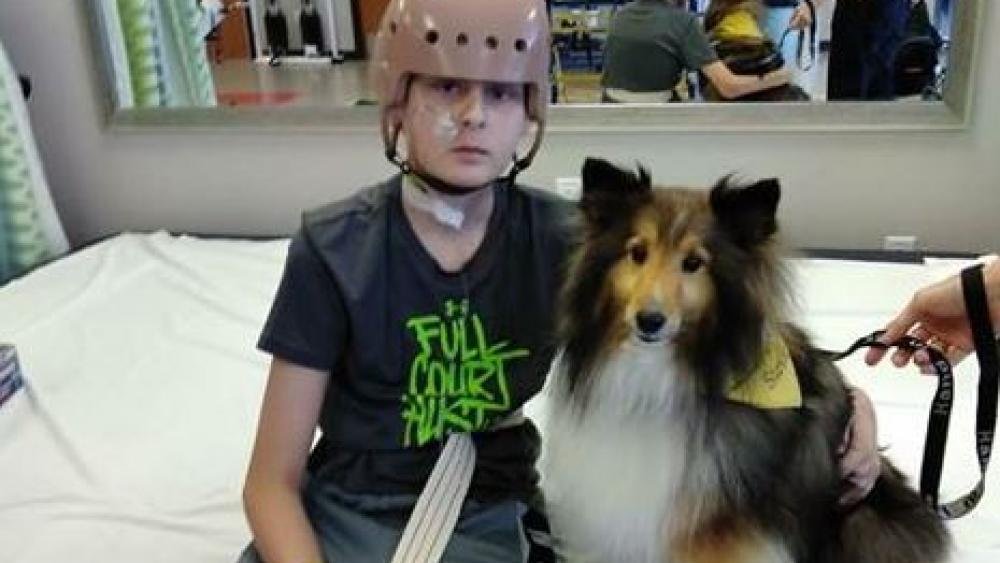 He’s being called the “miracle in Mobile.” After suffering a severe brain injury in a dune buggy accident, and being brain-dead for several days, an Alabama teen has made a miraculous recovery.According to WALA Fox 10, Trenton McKinley, 13, was riding in a small trailer being pulled behind a dune buggy when the accident happened. Trenton’s friend who was driving the buggy, hit the brakes quickly, causing the trailer to flip over.

Trenton told the television station he grabbed and threw his four-year-old niece out of harm’s way, but in doing so was pinned by the trailer as it came down. “I hit the concrete and the trailer landed on top of my head. After that, I don’t remember anything,” Trenton told Fox 10. The teen was rushed to the hospital where doctors counted seven skull fractures.

His parents had to go through their worst nightmare. “All I saw was a stretcher with his feet hanging out. He was dead a total of 15 minutes,” his mother, Jennifer Reindl told Fox 10. “When he came back, they said he would never be normal again. They told me the oxidation problems would be so bad to his brain, that he would be a vegetable if he even made it.”

Doctors determined the teen was brain-dead and his breathing was shallow. His parents knew they had a difficult decision to make. They could help five other kids by donating Trenton’s organs, so they signed the necessary papers.

“They said the next time his heart stopped they had to let him die. This was a Saturday or I could sign a paper to donate his organs to save five other kids and they would keep hitting him with adrenaline till Monday….so I signed it,” Reindl wrote in a Facebook post. “His eyes were solid black and dry and I knew he would not hesitate to save 5 more lives.”

Then, a miracle happened. One day before his doctors were to pull the plug on his life support, Trenton began to show signs of brain activity.

“The next day I got a call. They canceled the final brain wave test right before they hooked him up his hand moved. Then his feet,” Reindl continued in the Facebook post. “So they looked at his eyes and they were back. He had blue eyes. Now they are green with small white specks like glitter. They say when you look upon God…pigment changes…and my baby was in heaven for a whole day….he is a miracle.”

Fox 10 reports that Trenton believes he went to heaven. “I saw a dark male figure with a beard,” McKinley recalled. “He held my hand as I walked through a field. I was holding a baby in my arm. My mom told me she lost a boy from a miscarriage before I was born. I know it was my brother.”

Trenton continues to recover, although he’s dealing with nerve pain and seizures almost daily. He has had three brain surgeries and currently only has half of his skull. The other half will be reconnected soon in the next surgery.