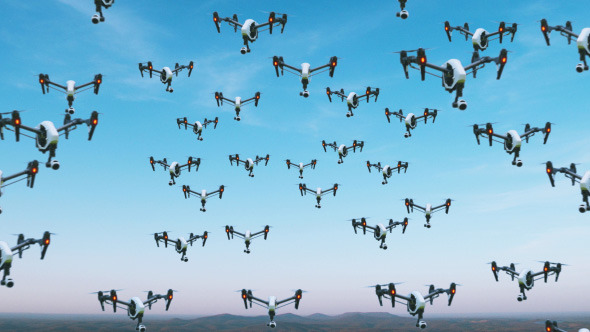 The Pentagon continued it’s quest to unleash a 21st-century version of locusts on its adversaries this week after another successful test of drone swarm technology was completed using 103 Perdix micro-drones. This large scale drone army is made possible by advancements in artificial intelligence, which allows groups of robots to act together to demonstrate advanced swarm behaviors such as collective decision-making, adaptive formation flying and self-healing.
“Perdix are not pre-programmed synchronized individuals, they are a collective organism, sharing one distributed brain for decision-making and adapting to each other like swarms in nature,” said William Roper, director of the Pentagon’s Strategic Capabilities Office.
Such drone swarms could change the face of modern warfare and some prophecy watchers find both the technology and name of the US Naval program behind it perhaps more than coincidence.
What makes the swarm unique is that any hostile aircraft, manned or unmanned, can be brought down by a single missile, but a swarm can take multiple hits and keep going. Several test simulations by the Navy have shown that drone swarms are consistently able to get past ship defenses that are geared towards shooting down single planes.
With manned aircraft and ships, the pilot’s life counts for a lot; but swarming drones are expendable and high “casualties” do not matter as much. This is a very different world to the dogfights that, historically, have made up modern warfare and could drastically alter the course of air warfare forever. Experts predict that as drone swarm techniques are perfected they will expand both in number and use.
Some prophecy watchers find it interesting that the Bible describes “locust” type creatures that play a significant role in end-time conflict.
Revelation 9 describes them this way:
“The shape of the locusts was like horses prepared for battle. On their heads were something like crowns of gold, and their faces were like faces of men. They had hair like the hair of women, and their teeth were like the teeth of lions. They had breastplates like breastplates of iron, and the sound of their wings was like the sound of chariots with many horses running to battle. They had tails like scorpions and stings in their tails. Their power was to hurt men for five months. They had as king over them the angel of the bottomless pit, whose name in Hebrew is Abaddon, and in Greek his name is Apollyon.” (Revelation 9:7-11).
What on earth was the Apostle John talking about? Exactly what kind of locusts did he witness on the Isle of Patmos where he received these prophetic revelations?
The traditional interpretation is that these locusts could be evil entities and/or demonic physical or spiritual beings that will rise up out of the bottomless pit (abyss) to torment people and assume the characteristics of locusts, some even feel CERN experiments could be responsible for such an occurrence.
Others speculate they may be some form of grotesque variation of natural locusts as we know them today (perhaps even some form of chimeras or other DNA manipulation that scientists are now moving ahead with), or did John the Apostle perhaps see some advanced military aerial machinery that he lacked the words to describe?
The revelations were given to him about 2,000 years ago when there would have been no way for him properly to describe 21st-century technological inventions that would follow many centuries later. Is it possible John was describing some type of technology in our day similar to the LOCUST program?
Until recently, the most common technological correlation was that of helicopter gunships but, as insect looking drones and swarm technology become more common, this may present an interesting possible explanation and the name of the program being called “LOCUST” could not be more ironic.
Either way, Revelation 9 suggests a time of immense pain and suffering that no one will want to experience, regardless of what final form it takes.